I must say that I am impressed. She built Christinehof in 1740, first it was called “the new castle/the new house” or something, close to her alum shale business in Andrarum, just because she needed someplace to sleep when she was visiting.
Nice accomodation apartment! 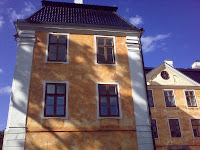 Christina Piper, the woman I am talking about was a great entrepreneur. Today it does not seem fair, but she saw to that her employees was given food as a great part of their salary so they would stay. She put up hospital and set tough rules for people leaving and entering the area so deseases would not spread and make people stay home from work.
She even minted coins that only worked within her land. A way of keeping her own money within her own business. 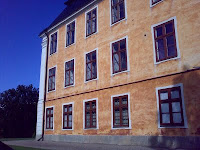 Not very fair or democratic if you look at it today but with the serfdom of the time that was probably not a bad life as most people had.
Christina Piper was married to the King´s (King XII) right hand and was at the time , a business woman rarely seen. Her company had over 900 employees, compare that to Scanias largest city Malmo (Malmö-with swedish letters) that at the time had 2000 inhabitants so it was not so strange that she had her own court following her when she travelled.

You can visit the castle inside and they have really great guides who paints up pictures in your head about how it was during Christinas time. They talk about the rooms and what happened there but also put it all in perspective to what happened in rest of the world during the time.

Unfortunately it is not allowed to take photos inside. 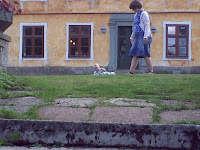 The house is built in the “Karoliner-style” (A Swedish genre and a Swedish link that actually was a bit out of fashion when it was built but it still was very modern inside. They even had a toilett. Just a hole from the upper floors right down a shaft. I found details about everyday life very amusing and a the same time interesting, it gives me an insight of how it really was living during the 18th century as a noble lady. When she was going to the toilet she opened the door in the hall way right beside the dining room and took a seat. It was just that the rrom was so small, so when sitting on the place, you had your legs out in the hallway because you could not close the door. Even if you could have, you did not, because the servant over taking care of you had to have the old but washed handkerchief  ready for you.


You did not, it seems to, care if your gest around the dinner table heard you during your visit. Maybe they got jealous because you had a “room” in the hall way that they did not have?

The castle is very beautiful and mighty, and it was mostly used as a summer palace because it was, and is, very difficult to warm up and keep warm. 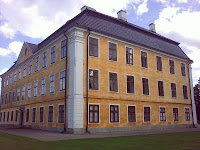 Here is a short film shot outside the castle. It is my wife and my oldest son walking/crawling in the grass.

This is beside Hovdala castle one of the best guided tours I have been to in Scania.

Thanks for reading! Remember to sign up to My newsletter and get a free map of Scania so you can follow the stories and se where The Castles are situated.

The newsletter form is either to the left (on a computer) or below (on phone).